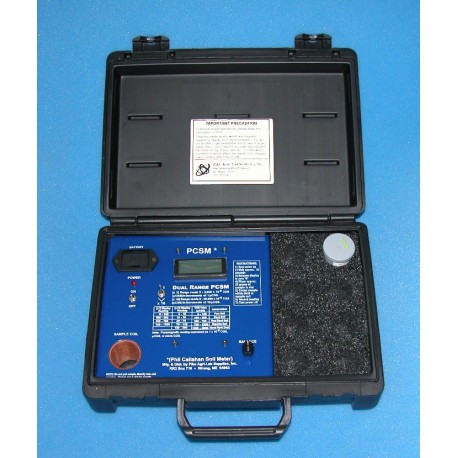 The PCSM is available to family farmers who could not afford a $4,000 - $8,000 research meter, calibrated down to 3 decimal places. The PCSM offers readings to help a farmer save his soil from the destruction advocated by present day chemical propaganda.

This product is no longer in stock

Definition of paramagnetism: The atoms or molecules of a paramagnetic substance have a net magnetic spin such that the spins are capable of being temporarily aligned in the direction of an applied electromagnetic field when they are placed in that field. This produces an internal magnetic field (magnetic moment). They differ from magnetic substances (such as iron, nickel, & cobalt) where such spins remain aligned even when they are out of the applied field, e.g. are permanent. Magnetic susceptibility is measured, according to the physics handbook, in millionths of a CGS unit (Centimeters Grams Second), 1 × 10-6 CGS, or µCGS.

Excerpt from Paramagnetism - rediscovering natures secret force of growth: " I have always considered it unfortunate that most scientific CGS meters like the Bartington Model MS2, cost between $4000-$8000 depending on attachments......What is needed for the practical working farmer is a simple hand-held meter that will read positive paramagnetism from 0-2000 CGS... with the help of Bob Pike, we have spent over a year perfecting this instrument and have named it the P.C. Soil Meter (PCSM)......I have tested it all over the United States and in Japan and Australia. It is rugged and works to perfection."  THE PCSM IS MANUFACTURED EXCLUSIVELY BY PIKE AGRI-LAB SUPPLIES AND IS THE ONLY LOW COST PARAMAGNETISIM METER IN THE WORLD!

The PCSM's currently have a lead time of approximately 7-8 weeks for shipping.