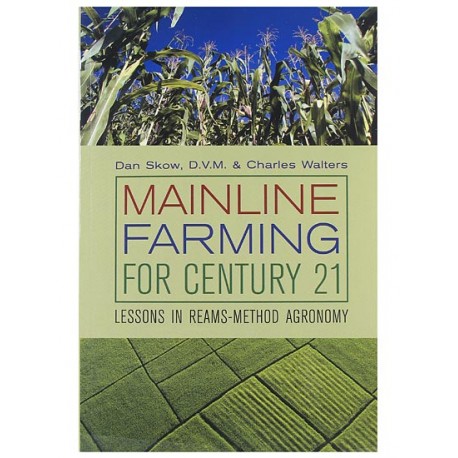 Mainline Farming for Century 21 is more than a book of theory -- it teaches how to measure fertility down to the atomic level.

This product is no longer in stock

Mainline Farming for Century 21 is a graduate course in agriculture. It does not settle for tip-toeing beyond the conventional, it takes bold strides — and it answers what the farmer wants to know, all the while demolishing the mythology on which toxic rescue chemistry has been built. Few people have asked and answered the right questions with the total consistency of Dr. Dan Skow. His teacher was the late Dr. Carey Reams, and the lessons Skow learned — and improved upon — were strong meat. They led him to a full appreciation of cause and effect, and the role of precedence in agriculture.

Dan Skow and Charles Walters have taken the complex biological theory of ionization as applied to agriculture and made it accessible to all. But Mainline Farming for Century 21 is more than a book of theory -- it teaches how to measure fertility down to the atomic level and project forward bins and bushels with brix high enough to confer immunity to fungal, bacterial and insect attack—and to ward off weeds. The practical, hands-on advice in this manual will lead growers to increased yields and more fertile acres, all without the use of toxic, synthetic chemicals.